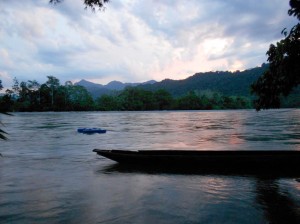 Matthew Oakley, technical director of SHP and Martina Reiser, SHP team assistant and interpreter, had a long journey from Germany into the jungles of the Peruvian Amazon. Once arriving in Lima, the two spent some days travelling to the remote village of Marisol, while the turbine had arrived much earlier by boat. Together with the engineering team of the San Martin Department of Energy and Mining and some residents of the village, the turbine was secured in the Rio Huayabamba within twoday´s time.

On December 7th Matthew Oakley will return to Marisol for final electrical installations and for the inauguration ceremony scheduled for the 14th of December. Expected guests include the Director of the Rural Electrification Department in the Peruvian Ministry of Energy and Mining, Fernando Rossinelli Ugarelli and Rafael Rengifio del Castillo, Director of San Martin´s Ministry of Energy and Mining, along with many other regional representatives of the Peruvian government.